The parade honoring all veterans, active-duty military members and reservists stepped off at 11 a.m. on Third Street at Hanover Street. More than 1,800 individuals from 75 entrants took part. 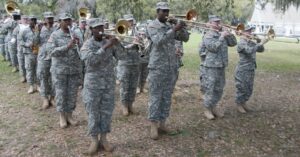 Leading the parade was the 208th Army Band out of Concord, N.C. “The primary mission of the band is to promote the esprit de corps of our fighting forces, and to serve as a goodwill ambassador throughout North and South Carolina,” according to the band’s website.

The 208th Army Band’s history began in 1956, when the band was activated as the 108th Division Band after a lateral transfer of personnel and equipment from the 94th Army National Guard Band of North Carolina. After multiple moves and redesignations, in 2008 the band was realigned under the 81st Regional Support Command, headquartered at Fort Jackson, S.C., and designated as the 208th Army Band. After the realignment, the band  moved from Charlotte, N.C., to its current home in Concord.

The 2d Marine Division Band – “The Division’s Own” – was formed from elements of the 2d, 6th, and 8th Marine Regiment Bands. They assembled for the first time in Wellington, New Zealand, during World War II. Members of this band fought on Tarawa, Tinian, Wake Island, Guadalcanal, and Saipan.

Since World War II, the 2d Marine Division Band has continued its wartime missions, participating in both the Korean and Vietnam Wars as military police, litter bearers, and security forces. More recently, the band deployed in support of Operation Iraqi Freedom, serving as a security platoon in the Al Anbar Province, Al Assad, and Fallujah. Members of the band have also deployed in support of Operation Enduring Freedom, serving the Division in various capacities in Helmand Province, Afghanistan.

The 2d Marine Division Band provides musical support for the five major commands and 47,000 Marines for whom Camp Lejeune is home.  Known for their marching and musical excellence, the members of “The Division’s Own” are proud of their role as musical ambassadors for the Corps.

Contact us to participate in our 2023 Veterans Day Parade!

Go to the APPLICATION page to join in the Parade or go to the CONTACT page and fill out the form to INQUIRE, SPONSOR or VOLUNTEER for the 2023 Parade!